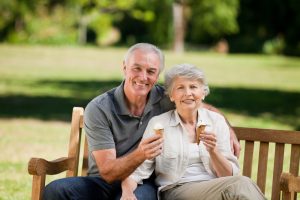 Lee and Don have worked most of their lives, raised three children and as both were into their 70s decided it was time to downsize and relocate. But they had collected a lifetime of possessions and memories. They had purchased a 2,000 square foot condo which was less than half the size of their family home. There was a lot of work to do. Family members took the belongings, furniture and other household effects that neither Lee nor Don needed to pack and move with them. Still, there were a lot of things that did not go.

Lee says that the high volume of ‘extra stuff’ resulted from Don’s habit of keeping just about everything he had come in contact with. Plus, once he moved his office into the kitchen in their home, room was slowly disappearing. Don, a semi-retired physician, had collected forty years worth of files and office odds and ends during his career. A senior move consultant not only assisted with getting the Switzes organized and coordinated the downsizing, the end results were amazing.

Not only did Lee and Don manage to fit into their new condo and still have lots of elbow room, they discovered that their previous larger home was holding them back. It prevented them from spending their time travelling and participating in several local and regional activities. It also got in the way of spending time with friends and family. Time spent keeping the large yard and garden tended to, following long hours at work, just left no time for anything else.

That’s how the home started to get cluttered and took over space in rooms that were once used for other things but were now reduced to storage areas. They also did not need all the space that their family home had. Utility bills were showing that rooms that were not being used effectively still cost money to keep heated.  Now, after their successful move, they highly recommend contacting a senior move manager to get you ready to downsize without problems.

So, what exactly does a senior move manager or consultant do?

The short answer is that one assists a senior or senior couple downsize belongings for a move into a new and much smaller home. Often this is to a care facility or similar seniors complex but it can be helping a couple like the Hoffmans reduce their clutter and extra stuff no longer needed so they can relocate into a smaller home and enjoy retirement with less responsibilities.
If you are good at organizing a household and can socialize with people in your peer group or slightly older, you may have what it takes to fill such a vital role in other people’s lives.

If that sounds like you’d be doing all the work, think again. In actual fact the tasks listed above will be needed to be completed but your role is to put the right people in place to actually do the tasks outlined. Essentially you are the manager of the stages leading up to and following the move from one home to a smaller one. Your most important task is to work with the senior or senior couple and assist them in coming to the realization that moving to a smaller home is the best for them. If they have already made that decision, then your key role is to assist with the decisions related to parting with or storing precious belongings.

What can you earn helping seniors downsize and relocate?

A survey conducted in 2014 of 200 NASMM (North American Senior Move Mangers) member organizations showed 66% of them were charging between $30 and $60 per hour for their services. The rest of them were charging upwards of $60 per hour.  As for the amount of time required for this part-time job, the same survey saw timeframes for 42% of the respondents ranging from seventeen to thirty-three hours spent to complete a job. An additional 39% said they worked more than thirty-three hours on a job.

A job like this requires a kind heart, a sympathetic ear and a firm direction with the goal of helping another senior reduce the clutter and move forward in their new life. If this sounds like something you would like to do, then check out my guide, How To Start a Profitable Senior Relocation Business. 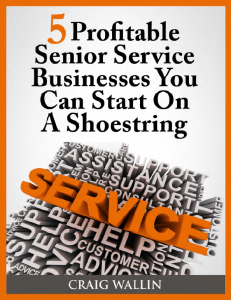 No email address or signup required!

With over 40-million Baby Boomers continuing to age, the trend shows that in the next decade the over 65 age group is going to increase by another … END_OF_DOCUMENT_TOKEN_TO_BE_REPLACED

Now that you have started up your very own business, how do you get those senior concierge jobs I know are out there waiting for you? I have a total … END_OF_DOCUMENT_TOKEN_TO_BE_REPLACED

With 47 million Americans over age 65, and 7 million over 85, senior service businesses have become a booming cottage industry, as seniors require a … END_OF_DOCUMENT_TOKEN_TO_BE_REPLACED

Did you know there are a few secrets that can be the difference between successful and not-as-successful senior concierge businesses? I have stated … END_OF_DOCUMENT_TOKEN_TO_BE_REPLACED

Providing senior home safety surveys is one of the fastest growing senior service businesses, as more and more baby boomers turn 65. As … END_OF_DOCUMENT_TOKEN_TO_BE_REPLACED

So you’ve decided on starting your own senior home care business. It’s a great idea when you consider that you are targeting an age group where there … END_OF_DOCUMENT_TOKEN_TO_BE_REPLACED

Now that you have gone through all the necessary steps to get your senior service business up and running, you can relax, right? Actually, that should … END_OF_DOCUMENT_TOKEN_TO_BE_REPLACED

Of course I’m going to say that a senior transportation business is the perfect opportunity for anyone looking for an extra stream of income. What I … END_OF_DOCUMENT_TOKEN_TO_BE_REPLACED

As you have probably noticed as you get older that some of your friends and acquaintances just aren’t as mobile as they used to be. In some cases, … END_OF_DOCUMENT_TOKEN_TO_BE_REPLACED

As you probably already know, with an aging population there will continue to be a demand for services designed specifically for seniors. This is why … END_OF_DOCUMENT_TOKEN_TO_BE_REPLACED

I am a firm believer that one of the easiest businesses to start up is a senior concierge service. I say that for several reasons. There is low start … END_OF_DOCUMENT_TOKEN_TO_BE_REPLACED

You have chosen to launch a very profitable and valuable service in your community with a NEMT business.  (FAQ - NEMT means non-emergency … END_OF_DOCUMENT_TOKEN_TO_BE_REPLACED

America is aging fast. There are now over 47 million senior citizens over 65 in the U.S. this year, and that number is expected to double in just a … END_OF_DOCUMENT_TOKEN_TO_BE_REPLACED

Almost two-thirds of seniors in the U.S. own a pet, and many have more than one. All these pets require daily exercise, feeding and an occasional trip … END_OF_DOCUMENT_TOKEN_TO_BE_REPLACED

A non-medical home care business provides services that help seniors remain independent as long as possible in their own home. Caregivers help with … END_OF_DOCUMENT_TOKEN_TO_BE_REPLACED